London Breed is the 45th Mayor of City and County of San Francisco. 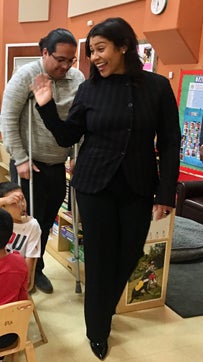 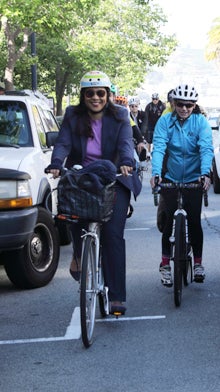 Mayor London Breed is the 45th Mayor of the City and County of San Francisco and the first African-American woman Mayor in the City’s history.

Mayor Breed is working to create a more equitable and just San Francisco for all. Since February 2020, she has led San Francisco’s response to COVID-19, with a focus on slowing the spread of the virus and protecting the health of the most vulnerable. Her early and decisive actions to issue a Stay Home Order in mid-March have been credited with controlling the spread of COVID-19 in San Francisco, preventing the health care system from becoming overwhelmed, and saving lives. Under her leadership, the City has developed a network of COVID-19 vaccination sites with the capacity to vaccinate at least 20,000 people per day and is working to deliver vaccines as quickly and equitable as possible.

In addition to leading the City’s COVID-19 emergency response, Mayor Breed is looking ahead to San Francisco’s recovery from COVID-19. She convened an Economic Recovery Task Force to guide the City’s efforts to sustain and recover local businesses and employment, and mitigate the economic hardships that are affecting San Franciscans.

In June 2020, Mayor Breed announced her vision to fundamentally change the nature of policing in San Francisco and issued a set of policies to address structural inequities. Her priorities to achieve this vision are ending the use of police in response to non-criminal activity, addressing police bias and strengthening accountability, demilitarizing the police, and promoting economic justice. Part of Mayor Breed’s vision for promoting economic justice includes reinvesting City funding from law enforcement into the African American community.

Since becoming Mayor in July 2018, she has focused on helping the city’s homeless population into care and shelter, including opening nearly 900 new shelter beds in less than three years. Under the Mayor’s Homelessness Recovery Plan, the City will create 6,000 placements for people experiencing homelessness, including permanent housing.

To make San Francisco more affordable in a time of increased housing costs, she is focused on adding more housing for low- and middle-income residents by streamlining bureaucracy and cutting permitting times while also investing more than $1 billion in affordable housing, including moving forward a $600 million affordable housing bond. She has added mental health stabilization beds, authored conservatorship legislation, and launched a Street Crisis Response Team to respond to mental health-related 911 calls, as part of her initiative to help those suffering from mental health and substance use disorder on San Francisco’s streets.

To ensure that all San Franciscans have access to a thriving economy, she has invested in workforce development opportunities for local residents, including her Opportunities for All initiative, which is providing more than 4,000 paid internships for youth to prepare for their future careers.

Mayor Breed has pushed to make San Francisco a cleaner and safer city by expanding street cleaning and increasing police foot patrols in order to stabilize areas of need. She is committed to furthering San Francisco’s leadership in combating climate change by pushing ambitious environmental goals, including transitioning to 100% renewable energy by 2030.

Prior to being elected by voters in an historic June 2018 election and winning re-election for a full four-year term in November 2019, Mayor Breed served as Acting Mayor, guiding and leading San Francisco following the sudden and tragic passing of Mayor Edwin M. Lee. Before her election as Supervisor, Mayor Breed served as Executive Director of the African American Art & Culture Complex in the Western Addition for more than over a decade, transforming the center into a vital, financially-stable community resource that provides after school arts and cultural programs for youth and seniors. She also served as a San Francisco Redevelopment Agency Commissioner for five years and in 2010 was appointed by then-Mayor Gavin Newsom to be a San Francisco Fire Commissioner, where she served until her election to the Board of Supervisors.

She is a native San Franciscan, raised by her grandmother in Plaza East Public Housing in the Western Addition. She graduated from Galileo High School and attended the University of California, Davis, earning a Bachelor of Arts degree in Political Science/Public Service. She went on to earn a Master’s degree in Public Administration from the University of San Francisco.